You are here:
April 1, 2015Leave a commentCarbonBy The Ace 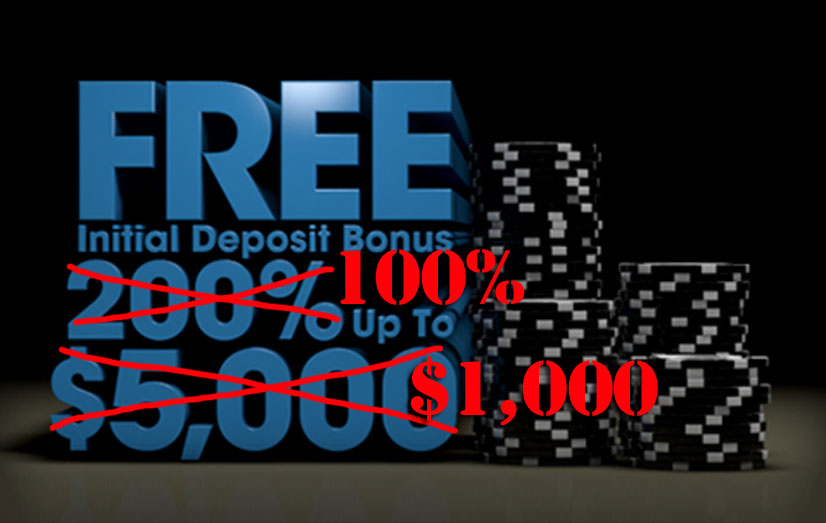 Carbon Poker’s already less than stellar initial deposit bonus has changed as of April 1, 2015 to be even, well, less stellar. Originally offering a 200% up to $5,000 bonus, which was astronomically impossible to clear, new players to Carbon are offered 100% up to $1,000. But wait, maybe it’s not so bad? Just because the amount was lowered doesn’t mean that it’s worse bonus. Perhaps the clearing rate went up? Let’s have a look…

A Comparison of the Changes

Let’s get right to the point. The table below shows the differences between the old and new bonuses.

So as you can see, everything is worse. It takes more points to earn $1 of the bonus, the time to clear the bonus was cut in half, the incremental release was increased from $10 to $20, and the already laughable 6.67% cashback is even worse at a measly 5% cashback. The table below shows how much rake you have to pay to earn the full amount.

Since Carbon Poker players receive 10 points for every $1 in rake spent, this means players must collect a total of 200,000 points for the full $1,000 bonus. While this is more realistic than the 750,000 points for the $5,000 bonus, it’s still a worse value overall since it requires a larger deposit and clears 25% slower.

It’s not shocking, to be honest. The climate of poker rooms that accept US players seems to be getting worse. The Merge Network hasn’t been doing as well in the past year in comparison to the past, so I’m not surprised they’re trying to cut costs. They also discontinued their VIP program in 2014. But if Carbon wants to attract grinders, one would think they would offer a more lucrative offer, or at least a bonus that is closer to what you can find on the Winning Poker Network. With a change like this, in addition to canceling their VIP program last year, it seems Carbon and Merge are attempting to attract more casual players, rather than grinders.

But alas, I can’t pretend to know the financials or motives of the network.